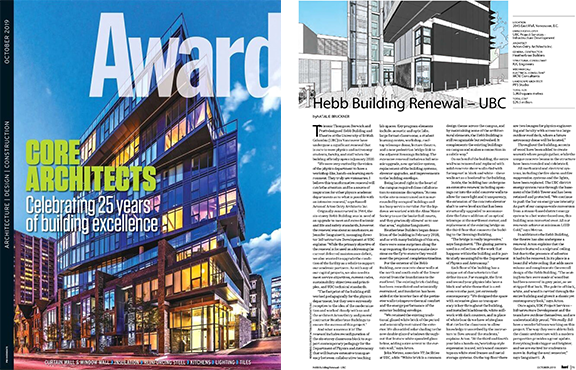 The iconic Thompson Berwick and Pratt-designed Hebb Building and Theatre at the University of British Columbia (UBC) in Vancouver have undergone a significant renewal that is sure to wow physics and astronomy students, faculty, and staff when the building officially opens in January 2020.

“We were very excited by the vision of the physics department to have a workshop-like, hands-on learning environment. They truly are visionaries. I believe this transformative renewal will catch the attention and be a source of inspiration for other physics academic departments as to what is possible with an intensive renewal,” says Russell Acton of Acton Ostry Architects Inc.

Originally constructed in 1964, the six-storey Hebb Building was in need of an upgrade to meet and exceed seismic and life and safety standards, however, the renewal was about so much more, as Jennifer Sanguinetti, managing director Infrastructure Development at UBC explains: “While the primary objective of the renewal is focused on addressing the current deferred maintenance deficit, we also wanted to upgrade the condition of the facility as a whole to support our academic partners. As with any of our capital projects, we also need to meet service objectives, current codes, sustainability objectives and principles, and UBC technical standards.

“The footprint of the building still worked pedagogically for the physics department, but they were extremely receptive to the idea of the modernization and worked closely with us and the architect Acton Ostry and general contractor Heatherbrae Buildings to ensure the success of this project.”

And what a success it is! The renewal includes reconfiguration of the six-storey classroom block to sup-port contemporary pedagogy for the Department of Physics and Astronomy that will feature extensive transparency between collaborative teaching lab spaces. Key program elements include: acoustic and optic labs; large format classrooms; a student learning centre, workshop, roof-top telescope dome, lecture theatre, and a new pedestrian bridge link to the adjacent Hennings Building. The extensive renewal includes a full seismic upgrade, new sprinkler system, replacement of the building systems, elevator upgrades, and improvements to the building envelope.

Being located right in the heart of the campus required close collaboration to minimize disruption. “Access to the site is constrained as it is surrounded by occupied buildings and is a busy service corridor. For the laydown we worked with the Alma Mater Society to use the basketball courts, and they graciously allowed us to use that area,” explains Sanguinetti.

Heatherbrae Builders began demolition of the building in February 2018, and as with many buildings of this era, there were some surprises along the way requiring the team to make decisions on the fly to ensure they would meet the proposed completion timeline.

For the exterior of the Hebb Building, new concrete shear walls at the north and south ends of the Tower extend from the foundations to the roof level. The existing brick cladding has been remediated and seismically restrained, and insulation has been added at the interior face of the perimeter walls to improve thermal comfort and the energy performance of the exterior building envelope.

“We retained the existing traditional glazed white brick of the period and seismically restrained the exterior. We also added solar shading to the new double-glazed windows through-out that feature white spandrel glass below, adding a nice accent to the curtain wall,” says Acton.

John Metras, associate VP, facilities at UBC, adds: “White brick is a common design theme across the campus, and by maintaining some of the architectural elements, the Hebb Building is still recognizable but refreshed. It  complements the existing buildings  on campus and makes a connection in  a subtle way.”

On each end of the building, the entire wall was removed and replaced with solid concrete sheer walls clad with Swisspearl in black and white – these walls act as a bookend to the building.

Inside, the building has undergone an extensive renewal including openings cut into the solid concrete walls to allow for more light and transparency, the extension of the concrete elevator shaft to serve level six that has been structurally upgraded to accommodate the future addition of an optical telescope at the northwest corner, and replacement of the existing bridge on the third floor that connects the building to the Hennings Building.

“The bridge is really impressive,” says Sanguinetti. “The glazing pattern used is a reflection of the work that happens within the building and is particularly meaningful to the Department of Physics and Astronomy.”

Each floor of the building has a unique set of characteristics that define its use. For example, the first and second-year physics labs have a black and white theme that is a reference to the past, yet extremely contemporary. “We designed the space with extensive glass as transparency is key throughout the building, and installed blackboards, white mill-work with dark counters, and in place of white boards we have white glass that circles the classroom to allow knowledge transcribed by the instructors to flow around the students,” explains Acton. “At the third and fourth-year labs a hands-on/workshop style expression is used, with wood counter-tops on white steel frames and metal storage systems. On the top floor there are two lounges for physics engineering and faculty with access to a large outdoor roof deck, where a future astronomy dome will be located.”

Throughout the building, accents of wood have been added to create warmth where people gather, while the unique concrete beams in the structure have been revealed and celebrated.

All mechanical and electrical systems, including the fire alarm and fire suppression systems and the lights, have been replaced. The UBC district energy system runs through the basement of the Hebb Tower and has been retained and protected. “We continue to push the bar on energy use intensity. As part of our campus-wide conversion from a steam-based district energy system to a hot water-based one, this building was converted over. All our renewals achieve at minimum LEED Gold,” says Metras.

In addition to the Hebb Building, the theatre has also undergone a renewal. Acton explains that the theatre featured a sculptural ceiling but due to the presence of asbestos

it had to be removed. In its place is a beautiful white ceiling that adds more volume and complements the overall design of the Hebb Building. “The seating benches were made of wood but had been covered in grey paint, so we stripped that back. The palette of black, white, and wood is carried through the entire building and gives it a classic yet contemporary look,” says Acton.

Once again, UBC Project Services – Infrastructure Development and the team have outdone themselves, and are understandably proud. “We really did have a wonderful team working on this project. The way they were able to link the classic architecture with a modern perspective provides a great update. Everything looks bigger and brighter, and we are excited for students to move in during the next semester,” says Sanguinetti.

This article is by Natalie Bruckner and originally published in the October issue of Award.

To view the October issue of Award magazine, click here.